Pentagon and Northern Command: Climate Change Has Implications for National Security in the Arctic 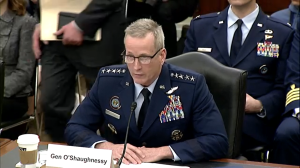 In case you missed it, on March 3 the Senate Armed Services Committee, Sub-Committee on Readiness and Management Support, held a hearing on “U.S. Policy and Posture in Support of Artic readiness.” Witnesses providing written statements and answering questions included the HON Dr. James Anderson, Performing the Duties of the Deputy Under Secretary of Defense for Policy and General Terrence O’Shaughnessy, Commander of U.S. Northern Command and North American Aerospace Defense Command. Both witnesses identified climate change implications for national security in the Arctic region. END_OF_DOCUMENT_TOKEN_TO_BE_REPLACED

In an interesting Defense One article from RUSI’s Elisabeth Braw (from late October last year, but we’re just catching up with it…), she details the ways in which a rapidly-changing climate can help facilitate China and Russia’s strategies of “blended aggression,” or “hybrid war,” which involves the exploitation of multiple disruptions in the global security landscape to undermine adversaries. The byline reads:

Increased refugee flows, weather threats, and declining food security will deepen tensions already being exploited to divide and weaken the U.S. and its allies.

Click here for the full article, as it’s worth a read.

Pres. Obama On How Climate Risks Compare To Other National Security Priorities

September 28, 2015 5:51 pm / 1 Comment on Pres. Obama On How Climate Risks Compare To Other National Security Priorities

During President Obama’s recent visit to Alaska, Rolling Stone’s Jeff Goodell sat down with him to talk climate. One of Goodell’s questions to President Obama was on how climate change compared to other national security risks. Both the question and President Obama’s response are worth reading and are copied below. Goodell also noted the significance of National Security Advisor Susan Rice’s participation in the Alaska trip: END_OF_DOCUMENT_TOKEN_TO_BE_REPLACED

Iceland’s Message to US: Look To the Arctic

In a recent CNN interview by Jason Miks, Ólafur Ragnar Grímsson, the President of Iceland, went into great detail about the changing geopolitical conditions in a melting Arctic and the distinct role of the United States in the region. Iceland, an Arctic nation which recently rebounded from a severe economic shock, can certainly teach us something about balancing domestic and international security priorities (Iceland’s security is also entirely handled by the U.S. military, so its perspective on this issue is quite consistent with that of our armed forces in the region). END_OF_DOCUMENT_TOKEN_TO_BE_REPLACED