Raleigh, NC – As the citizens of North Carolina come to terms with the aftermath of Hurricane Florence and the devastating impacts of storm-related flooding, The Center for Climate and Security, in partnership with the North Carolina Department of Environmental Quality, North Carolina Sea Grant, and the Albermarle-Pamlico National Estuary Partnership have come together to discuss how the effects of sea level rise, storm surge, and extreme weather events can combine to greatly effect the state’s coastal communities, the military operations carried out at installations located in the eastern part of the state, and how planning for resilience can be integrated into the long-term outlook and policy for the region. END_OF_DOCUMENT_TOKEN_TO_BE_REPLACED

Upcoming Event in NC – Sea Level Rise and Security in the Southeast: Implications for the Military and Coastal Communities 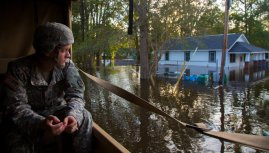 “Flash flooding because of rainfall is just the first phase. Once the rain gets back to the rivers, heading back to the Atlantic, there is another set of flooding.” Major General Greg Lusk, Adjutant General of the North Carolina National Guard

The Center for Climate and Security’s Military Expert Panel, including senior retired flag and general officers from each of the Armed Services, recently issued the 2ndedition of a report concluding that sea level rise risks to coastal military installations will present serious risks to the military mission, underscoring a ‘Responsibility to Prepare.’ The report includes new information regarding military installation vulnerabilities, including to the energy and transportation infrastructure that these installations depend on, showing significant risks to high-value military sites – in North Carolina and across the country (see our recent post highlighting Hurricane Florence’s impact on military infrastructure and surrounding civilian communities, as well as U.S. military, National Guard and Coast Guard operations in the state). The report asserts that policies for addressing climate change risks must go beyond military infrastructure resilience, to include the resilience of surrounding civilian infrastructure, as well as the resilience of military operations in the face of these rapid changes.

In this context, please join the Center for Climate and Security, in partnership with the North Carolina Department of Environmental Quality, North Carolina Sea Grant, and the Albemarle-Pamlico National Estuary Partnership, for a discussion about these significant risks, and the opportunities in North Carolina for addressing them. The event will kick-off with a screening of Tidewater, an award-winning film from the American Resilience Project, that details the challenges sea level rise presents to military readiness, national security, and coastal communities in the Hampton Roads area of Virginia – lessons that are certainly relevant to North Carolina.

The event is free, but registration is required. To register, visit https://www.surveymonkey.com/r/TidewaterEvent

END_OF_DOCUMENT_TOKEN_TO_BE_REPLACED

When it comes to climate change, there are some issues (sea level rise, Arctic ice melt) which it doesn’t take a science degree to get one’s head around.  Extreme weather, on the other hand, is highly complex and there isn’t always a simple way to characterize changes in a way that doesn’t spur debate.

Nonetheless, it is widely acknowledged by scientists, based on decades of rainfall data, that climate change is significantly increasing the frequency of weather events that deliver extreme rainfall, such as hurricane Florence. And what’s entirely beyond debate is that in addition to the climate risks civilian populations and infrastructure faces in the region, the Department of Defense has multiple important installations in areas that are vulnerable to extreme rainfall events, and Hurricane Florence just slammed into several of them.   END_OF_DOCUMENT_TOKEN_TO_BE_REPLACED 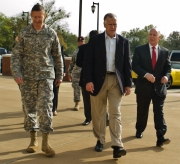 In an August 7 interview with Tim Boyum of Spectrum News in Charlotte, North Carolina, Republican Senator Thom Tillis made his concerns about climate change clear, suggesting that actions need to be taken to both address the human causes of climate change, and adapt to its locked-in effects. From the start of the interview (at 0:08):

Well, I think we have to come up with several strategies to recognize reality. That climate changes. Sometimes it changes just because it has over millennia, and other times it changes because of human factors. And if you don’t have a strategy, 1) to try and reduce the impact that human factors have on it, and 2) to adapt when the reality is that we’re gonna have to adapt in some cases, then…it has an impact on business. It creates another element of uncertainty that…business hates uncertainty. So there’s a lot of reasons to do it, for the obvious stewardship of the environment, but for also stewardship of business.

Further, when asked about his evolving position on the issue over the years (at 0:44), Senator Tillis referenced the U.S. military’s increasing concerns about the issue as an important factor in that evolution. From (1:06):

I think that the more progress we make. The more you talk with the military, and they view climate change as having some factors in different parts of the world. The more the science evolves…

END_OF_DOCUMENT_TOKEN_TO_BE_REPLACED

A recent study published in Nature Climate Change has found that the East Coast of the United States is particularly vulnerable to sea level rise. Compared to the global average, the study by Sallenger et al asserts that the coastline from Massachusetts to North Carolina is set to experience a rise in sea level that is “3–4 times higher…” Given the prevalence of key commercial centers along the East Coast, as well as critical naval installations (such as at Norfolk, Virginia), these projections are worrying, to say the least.