Rear Admiral Dave Titley on CNN: “This is a blatant attempt…to politicize the security aspect of climate change” 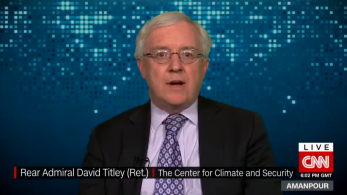 Yesterday, Christiane Amanpour of CNN spoke to Rear Admiral David W. Titley, USN (Ret), Senior Member of the Center for Climate and Security Advisory Board and former Oceanographer of the Navy, about the recent letter signed by 58 senior military and national security officials denouncing the William Happer-led process within the National Security Council to establish an adversarial climate change review panel. When asked why a group of people who aren’t normally vocal critics of Administration policy responded so vigorously to the proposed panel, Admiral Titley stated:

“What concerns so many of us who signed the letter is that this is really a blatant attempt by the National Security Council to politicize the security aspect of climate change.”

U.S. Intelligence Community: Impacts of Climate Change Raise the Risk of Conflict in 2018

For the past ten years, beginning with the last year of the George W. Bush Administration, the U.S. intelligence community (IC) has annually warned policy-makers of the security implications of climate change. This year is the eleventh. Yesterday, during a hearing before the Senate Select Committee on Intelligence, the National Intelligence Council (NIC) Director Dan Coats released the annual “Worldwide Threat Assessment,” which reflects the perspective of the entire U.S. intelligence community regarding the most significant risks to national security. Notably, the assessment includes a robust section titled “Environment and Climate Change” which not only details a range of security threats related to climate change, but also asserts that these risks, combined with other natural resources stresses, “are likely to fuel economic and social discontent–and possibly upheaval–through 2018.” In other words, the U.S. intelligence community believes these threats are not on the distant horizon, but rather, already occurring and likely to increase political instability this very year. END_OF_DOCUMENT_TOKEN_TO_BE_REPLACED

Chronology of Military and Intelligence Concerns About Climate Change

As we look toward a new Administration in the United States, and the path forward on addressing the myriad threats in a rapidly-changing geostrategic landscape, it’s worth having a clearer understanding of how the U.S. national security community has come to  its current level of concern about climate change. This concern didn’t happen overnight, or under a single administration. Rather, it’s the culmination of decades of assessments stretching back to the end of the Cold War. END_OF_DOCUMENT_TOKEN_TO_BE_REPLACED

Climate Change in the 2015 World Wide Threat Assessment of the U.S. Intelligence Community

On February 26, 2015, Director of National Intelligence James Clapper presented the World Wide Threat Assessment for the US Intelligence Community Statement for the Record to the Senate Armed Services Committee. A significant portion of the assessment highlighted risks associated with the impact of climate-exacerbated extreme weather events on global food and water security (see below for those excerpts). The assessment also looked at how climate change is a factor in increasing human security risks related to infectious diseases. END_OF_DOCUMENT_TOKEN_TO_BE_REPLACED

Conclusions from the NRC Report “Climate and Social Stress: Implications for Security Analysis”

The National Research Council’s recently released report “Climate and Social Stress: Implications for Security Analysis,” commissioned by the CIA, has been released, and contains a lot of interesting information and recommendations. Leaving most of the analysis for you to read, we wanted to highlight some of the report’s conclusions and recommendations. The report brief indicates that the conclusions fall under three broad categories: “…climate-security connections; improving understanding, monitoring, and analysis; and anticipating climate-related threats.” Below are excerpts of the conclusions, from the report brief, under each heading: END_OF_DOCUMENT_TOKEN_TO_BE_REPLACED