The Air Force’s Most Vulnerable Bases 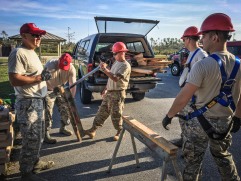 In 2017, the U.S. Congress directed the Department of Defense (DoD) to develop a list of the installations in each military service that were most vulnerable to climate change.  They gave DoD a year to do this work, as it wasn’t simple.  The DoD would need to look across its enterprise, and determine how it would measure vulnerability and assess which risks were specifically from climate change.  At the Center for Climate and Security, we published a briefer on the factors they might consider.

In early 2019, the DoD report was submitted to Congress, but it omitted the requested prioritization and had other puzzling gaps as well.  It omitted the Marine Corps.  It left out all non-US bases.  It didn’t respond to Congressional questions about mitigation and cost.  Instead, it included a list of 79 bases that the Department determined were its most critical, and then did a rudimentary assessment of the threat from climate change without prioritization.  Congress directed them to go back and redo the work. END_OF_DOCUMENT_TOKEN_TO_BE_REPLACED

Center for Climate and Security Advisory Board member, Rear Admiral David Titley, USN (Ret), published an excellent Op-ed today for the Washington Examiner with a message to President-elect Trump on the importance of building resilience to climate change, and how that agenda is tied to supporting our nation’s Veterans. Read the full article: “To President-elect Trump: Support our vets, build a resilient infrastructure.” See below for an excerpt: END_OF_DOCUMENT_TOKEN_TO_BE_REPLACED

Will Bugler, with the UK-based organization Acclimatise, recently sat down with RADM David Titley (Ret.) to discuss the global security implications of climate change. The podcast is an excellent summary of the key questions and issues surrounding climate and security, as well as a look at where the issue currently stands within the security sector (and the U.S. Navy, in particular).  You can listen to it here, and below is a brief summary: END_OF_DOCUMENT_TOKEN_TO_BE_REPLACED

The Center for Climate and Security: Our thoughts on climate change

The UK-based public policy news service, The Information Daily, reached out to us to see if we would like to comment on the changing climate.  You can read what we had to say here, or copied below.  The points made in this article echo the first blog article we wrote for the Center: An Unprecedented Risk Needs an Unprecedented Response. END_OF_DOCUMENT_TOKEN_TO_BE_REPLACED