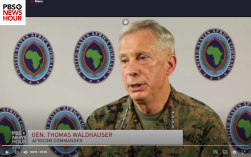 On April 16, the PBS News Hour ran a story called “In Niger, rising temperatures mean barren fields — but fertile ground for terrorism.” The story addresses climate change and its impact on food security in the country, as well as how some organizations, like U.S. Africa Command, the World Food Program, and CARE, approach the problem.

General Thomas Waldhauser, Commander of US Africa Command (AFRICOM) – head of all American military forces in Africa – was interviewed for the story. He stated:

The climate and environment challenges on the continent really do start to contribute to security challenges…Some of the [terrorist] groups in the Northern Mali-Niger area there, they leverage these challenges to recruit, because they really are after influence. And they want to maintain their livelihood.

The Center for Climate and Security’s Senior Research Fellow, Dr. Joshua Busby, was also interviewed for the story. He noted:

By Caitlin Werrell and Francesco Femia in climate and security on April 18, 2019.
← Central America: Climate, Drought, Migration and the Border International Military Council on Climate and Security Launches New Website →