Why does the Department of Defense call climate change a threat multiplier? Last week, Yale Climate Connections sat down with Sherri Goodman, Senior Strategist at the Center for Climate and Security and former Deputy Undersecretary of Defense (Environmental Security) to find out more. She explains, “Extreme weather and water shortages increase the risk of political instability and terrorism.” As a threat multiplier, climate change aggravates other stressors that together can threaten a nation’s stability. END_OF_DOCUMENT_TOKEN_TO_BE_REPLACED

Interview with Sherri Goodman: A Responsibility to Prepare

E-International Relations recently conducted a great interview with the Center for Climate and Security’s Senior Strategist, the Hon. Sherri Goodman, where she talks about both the unprecedented risks we face in today’s age, as well as the unprecedented foresight that technological developments have given us. An excerpt:

The most exciting current research and debates on climate security are occurring in three inter-related areas: First, the emergence of the “Responsibility to Prepare” concept, developed by the Center for Climate and Security, is enabling both deeper research and more consequential action on the unprecedented risks and unprecedented foresight we face in the climate era. We now live in an era of unprecedented threats from climate change, nuclear, biological and chemical weapons, cyber attacks, hyper-nationalism and other disruptive trends. At the same time, we have access to unprecedented foresight from technological advances in improved predictive capabilities, data analytics, artificial intelligence, quantum computing, virtual reality and other advanced technologies. As we acquire capabilities to better predict alternative futures, we have a responsibility to prepare for these unprecedented risks.

END_OF_DOCUMENT_TOKEN_TO_BE_REPLACED

The Climate and Security Podcast: Episode 6 with the Honorable Sherri Goodman 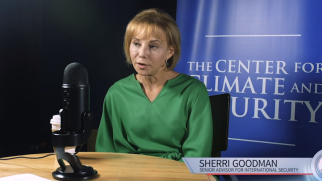 In this episode, host Dr. Sweta Chakraborty talks to the “Godmother of Climate and Security,” Sherri Goodman, Senior Strategist with the Center for Climate and Security. Sweta asks Sherri about the Arctic, which is changing faster than any other place on Earth! Sherri explains how the Arctic is warming at twice the rate of the rest of the planet–destabilizing infrastructure and resulting in a new ocean. She describes climate change is a “threat multiplier” (a term she coined!) in that it amplifies the impacts to various aspects of our lives, from the food we eat to the water we drink and to where we choose to live. This is an episode not to be missed!

END_OF_DOCUMENT_TOKEN_TO_BE_REPLACED

As the U.S. government freezes, the Arctic continues to melt. This is not a healthy state of affairs. In a recent article in Roll Call, Sherri Goodman and Robert Gagosian of the Joint Ocean Commission Initiative call for greater attention to a rapidly-changing Arctic by Congress and the White House. While in the coming days U.S. government officials are more likely to be exploring dining and drinking deals than the Arctic seas, it is a crucial issue that should be taken up as soon as possible, not least because it should lend itself to bipartisan cooperation. END_OF_DOCUMENT_TOKEN_TO_BE_REPLACED

Ellen Laipson, the Stimson Center’s President and CEO, recently moderated a discussion with Hon. Sherri Goodman, Senior Vice President, CNA and Richard Cronin, Director of Stimson’s Southeast Asia Program, on the evolution of environmental issues as an increasingly important part of human and national security.  Sherri Goodman’s account of her career in many ways parallels the evolution of the global security landscape. She started at the Senate Arms Services Committee with a focus on nuclear weapons and arms control during the Cold War, led the charge to broaden the definition of national security through her work as Deputy Undersecretary of Defense for Environmental Security (1993-2001). As she describes the transition, she went “from weapons to waste.” She has continued to lead in advancing understanding of environmental security risks as Senior Vice President at CNA, where in 2007 she led the development of the Military Advisory Board’s groundbreaking report, “National Security and the Threat of Climate Change.” END_OF_DOCUMENT_TOKEN_TO_BE_REPLACED

Climate change is a “threat multiplier.” This was the primary focus of an excellent piece in today’s Politico co-authored by the Hon. Sherri Goodman, former deputy undersecretary of defense, senior vice president and general counsel of CNA, and executive director of the CNA Military Advisory Board, and Gen. Gordon Sullivan, USA (ret), the 32nd chief of staff of the Army, president and chief executive officer of the Association of the United States Army, and member of the CNA Military Advisory Board. END_OF_DOCUMENT_TOKEN_TO_BE_REPLACED