The Climate and Security Podcast: Episode 14 with Dr. Nicolas Regaud 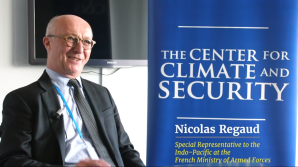 In this episode, host Dr. Sweta Chakraborty talks to Dr. Nicolas Regaud, Special Representative to the Indo-Pacific of the Director General for International Relations and Strategy at the French Ministry of Armed Forces, and Participant in the International Military Council on Climate and Security. Nicolas explains the French point of view on the importance of acting efficiently on climate change, given that there are French nationals and territories all over the world and in areas especially vulnerable to the impacts of a warming planet. The French military plays a critical role in safeguarding its global citizens, neighbors and critical infrastructure against the impacts of climate change; as well as in providing maritime security in close partnership with regional allies. Listen to this episode to learn more about French defense activities globally and in the key warming-affected region of the Indo-Pacific. END_OF_DOCUMENT_TOKEN_TO_BE_REPLACED

Cascading Disasters in the Mediterranean: Storm in Lampedusa

November 10, 2014 2:23 pm / 3 Comments on Cascading Disasters in the Mediterranean: Storm in Lampedusa

Last Friday the Mediterranean areas around Southern Italy experienced a rare “Medicane” event of tropical storm-like conditions. Jeff Master’s explains the science behind these rare weather events, and the likelihood of seeing more of them under a changing climate.

Storms of this nature are just one more stress to the small Italian island that is also a main point of entry to the European Union for migrants and refugees from places like Syria and Eritrea. The voyage from point of origin to the shores of Europe and Italy is no cruise END_OF_DOCUMENT_TOKEN_TO_BE_REPLACED

Spring Thaw: What Role Did Climate Change and Natural Resource Scarcity Play in the Arab Spring?

In a new post titled “Spring Thaw: What Role Did Climate Change and Natural Resource Scarcity Play in the Arab Spring?” the Woodrow Wilson Center’s Schuyler Null and Maria Preble have done an admirable job of reviewing both our report with the Stimson Center and the Center for American Progress, “The Arab Spring and Climate Change,” and E3G’s “Underpinning the MENA Democratic Transition.” From their summary: END_OF_DOCUMENT_TOKEN_TO_BE_REPLACED

Slate’s Abraham Riesman published a piece yesterday titled: “Could Climate Change Be Al-Qaida’s Best Friend in Africa?” Riesman includes quotes from the Center for Climate and Security, as well as from our colleague Dr. Nancy Brune of the Center for a New American Security. The piece focuses on the social, economic, environmental and climatic factors associated with unrest in Mali and northwest Africa, and how those factors might relate to the strength of non-state actors, including terrorist organizations. Worth a look.

This blog also appeared on the humanitarian news site, AlertNet.

The world is suddenly paying attention to the oft-ignored North African country of Mali, as it is racked by its most recent in a long string of crises: a coup d’etat. This political and constitutional crisis sits atop an already extremely vulnerable situation – a volatile mix of climate change, drought, food shortages, migration and immobility, armed insurrection and heavy weapons proliferation that threaten to plunge the country into a state of instability not unlike Somalia. As the international community, including the UN Security Council, moves to act on this crisis, it will be important to consider all the identifiable sources of Mali’s insecurity in order to get the solutions right. END_OF_DOCUMENT_TOKEN_TO_BE_REPLACED