The Human and Climatic Effects of an India-Pakistan Nuclear Conflict

On October 2, a team of researchers published the results of extensive work to model the effects of nuclear war between Pakistan and India. The scenario, posited for the year 2025, examined features a high-casualty terrorist attack on Indian government officials resulting in widespread conflict between these countries.

In “Rapidly expanding nuclear arsenals in Pakistan and India portend regional and global catastrophe,” published in Science Advances, the authors chose a scenario in which India and Pakistan successfully use 300 strategic nuclear weapons against one another’s urban targets. Their chosen scenario entails further conflict, but with some weapons failing to detonate and some being targeted at remote military sites for which damage was not included. END_OF_DOCUMENT_TOKEN_TO_BE_REPLACED

NPR on Climate and Security Scenarios with Francesco Femia

In yesterday’s episode of NPR’s On Point, Meghna Chakrabarti interviewed journalist Emily Atkin and Francesco Femia, the Council on Strategic Risks’ CEO and Co-Founder of the Center for Climate and Security, to discuss the implications of climate change for global instability and conflict. The show built upon an article in the New Republic by Emily Atkin, The Blood-Dimmed Tide, exploring a catastrophic 2100 climate scenario. Francesco touched on a number of topics, including climate risks to military installations, the growing bipartisan U.S. national security consensus on climate change and security (including across the intelligence and defense community), as well as the strategic benefits of U.S. investments in climate prevention and preparation (and conversely, the strategic negatives, vis-a-vis its competitors and adversaries, of doing nothing). Listen to the On Point episode here. The segment with Francesco Femia starts at 25:05, but the full show is worth a listen.

How Jordan’s Climate and Water Crisis Threatens its Fragile Peace

For years, security service recruitment has masked climate instability in rural Jordan. Now that strategy is breaking down and no one knows what will take its place.

In the desert villages of south Jordan, the security services dominate. They run many of the schools. They maintain the roads, water infrastructure, and bridges. Crucially, they also employ most of the men.

Roughly 70% of those in full time employment in rural stretches of the southern governorates are in the army, civil defense, or intelligence corps, according to CCS research conducted in about 20 villages, a figure that rises to around 90% in some of the most distant, isolated communities. Most of the other residents are dependent on soldiers’ spending. Such is the security services’ outsized role that many districts have practically been emptied of young and middle-aged men. “It’s only when the soldiers are back home that this feels anything like a village,” said one farmer in the far southern Aqaba governorate. END_OF_DOCUMENT_TOKEN_TO_BE_REPLACED

Femia on TRT World: The Strategic Benefit of Acting on Climate and Security

In an interview segment released yesterday by TRT World, Francesco Femia, the Co-Founder of the Center for Climate and Security and CEO of the Council on Strategic Risks, spoke with host Ghida Fakhry and WRI’s Rebecca Carter about the increasing evidence of a connection between climate change and conflict, the  growing bipartisan consensus in the United States about the security risks of climate change, and the idea of action on climate and security as a strategic benefit for countries that wish to expand their leadership and influence.  The interview begins at 17:45, below. 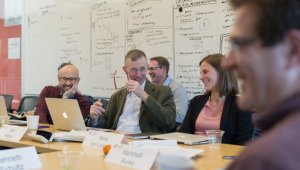 Experts enjoying a bit of levity in the midst of expert elicitation. Photo Credit: Woods Institute for the Environment.

Today’s issue of Nature reports the results of an attempt to mine the scholarly debate over climate-conflict links for consensus using “expert elicitation.” The process, led by Katharine Mach of Stanford Woods Institute for the Environment, brought together experts from economics, geography and political science to identify sources of agreement and disagreement in the now large body of evidence linking climate change to conflict – in this case, domestic armed conflict, like the ongoing civil wars in Syria and Yemen. END_OF_DOCUMENT_TOKEN_TO_BE_REPLACED

Every year since 2007, the Institute for Economics and Peace has published the “Global Peace Index (GPI),” which, as the title implies, measures the “peacefulness” of nations and regions of the world. In 2019, the GPI for the first time factored climate change into its analysis, and the results were significant. The GPI determined that climate change already has a notably negative impact on peace and security, illustrated by the following top 7 findings:

END_OF_DOCUMENT_TOKEN_TO_BE_REPLACED

The Climate and Security Podcast: Episode 13 with Louise Van Schaik 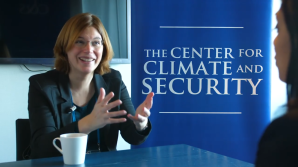 In this episode, host Dr. Sweta Chakraborty talks to Louise Van Schaik, Head of the Clingendael International Sustainability Centre at the Clingendael Institute and Senior Member of the Executive Committee of the International Military Council on Climate and Security (IMCCS). Louise discusses the relationship between climate change, security and migration from a European perspective. She describes the evolution of the Planetary Security Initiative and how it had worked to help reduce and reverse security risks associated with climate change. She emphasizes the importance of identifying and undertaking climate adaptation actions for the purpose of conflict prevention and peace building efforts. Check out the incredible examples Louise provides in this episode!