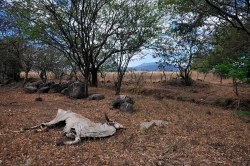 The dominant media narrative that explains the reasons for current Central American migration to the United States centers on the dismal economic and security conditions across source states: Honduras, Guatemala and El Salvador. The ‘failing economies’ and ‘corrupt governments’ narratives largely frame our understanding of the near en masse emigration of Central Americans northwards. However, those explanations don’t tell the whole story. The ongoing food security crisis across the region (caused by drought, crop disease, and water shortages) deserves special examination, not only because it might be a leading causal factor for the crisis, but also because it is undoubtedly one of its catalysts. As such, any U.S. policy prescriptions that do not help to address the catastrophic impacts of environmental changes on Central American agriculture, will fail to achieve their objectives.