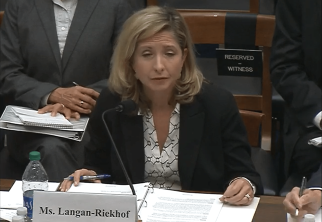 Maria Langan-Riekhof, Director of the Strategic Futures Group at the Office of the Director of National Intelligence, speaks to the Subcommittee on Intelligence and Emerging Threats and Capabilities Hearing: “Climate Change in the Era of Strategic Competition,” December 11, 2019

Concerns about the effects of climate change on security – particularly the way that climate change can exacerbate threats to U.S. interests – have driven several recent U.S. House of Representative hearings. Senior intelligence officials have been at the forefront of these warnings. For example, in recent testimony  by Maria Langan-Riekhof of the Office of the Director of National Intelligence (during an extraordinary hearing of the Emerging Threats Subcommittee titled “Climate Change in the Era of Strategic Competition”), she highlighted that water stresses in the Middle East and Central America are increasing, and that these changes will degrade already poor government services, strain communities, and challenge agricultural production. These and other stresses can lead to increased local and regional political, economic, and social instability.

The continual interplay between climate change and water security creates an increasingly dire feedback loop for populations and further instability (for individual aspects of instability see here for climate and conflict and, here, here or here for water and conflict). Two new studies contribute details of what water insecurity means to populations that are stressed by multiple variables that emanate from the natural and social environments in which they live.

The first study presents a broad global framework from the United Nations Children’s Fund that seeks to bring safe drinking water and sanitation services to the hundreds of millions of children around the world living in conflict areas who lack access to these services. The second study is a very focused, fine-grained survey that collected water insecurity data from face-to-face interviews with 8,127 households spread across 23 low- or middle-income countries. Children who live in extreme fragile contexts are up to eight times worse off than children who live in stable countries. As noted by BMJ Global Health:

These conditions increase child and family risk of malnutrition, violence, exposure to multiple diseases, and, poor water, sanitation, and hygiene services and facilities. By 2030, “some 80% of the world’s poor will live in fragile contexts.” The majority of fragile/extremely states are currently located in Africa, the Middle East, and South Asia.

In addition to the stresses of inadequate water and sanitation services on a population, a suite of other variables contributes to fragility. According to Young et al. (2019) these other variables include “inequality, marginalization, exclusion, poor governance, weak institutions and sectarian” divisions. Add in climate change effects and fragility is further increased.

While cooperation on water between parties in conflict does occur when service areas are split between opposing groups for drinking water, sanitation, and electricity, e.g., Ukraine, Syria, Yemen—the continued availability of these services may become untenable for the utility because of physical damage to the distribution/collection system and the local economy. Consumers may no longer be present in sufficient numbers to pay for services. External financing may also disappear if banks no longer provide loans to maintain or expand infrastructure. Thus, water and sanitation services that were previously available may be significantly degraded or cease altogether.

To address these challenges, UNICEF created the Water Under Fire campaign to support the 2030 Agenda for Sustainable Development’s Goal 6 — “Ensure availability and sustainable management of water and sanitation for all.” UNICEF then linked it to four of the five Agenda for Humanity core areas including—Prevent and End Conflicts, Leave No One Behind; Work Differently to End Need; and Invest in Humanity. The report focuses on the intersection of humanitarian, development, and peace-building activities that occur in fragile and conflict areas by presenting a framework augmented by case studies for water and sanitation services that would, if implemented, enhance the success of all these activities.

Measuring household water insecurity across cultures has been problematic because of the lack of standardization. The current study created “the first tool for comparative analysis of household water insecurity to be able to identify exactly who is water insecure, to what extent, and where and when it occurs.” Samples were drawn from households in low-and-middle income households in 23 countries. The samples sought to “maximize heterogeneity of region, geography, culture, infrastructure, seasonality and specific problems with water.” Ultimately, individuals from 8,127 households were surveyed using a questionnaire across 28 sites in the 23 countries. Countries included those UNICEF labelled as fragile/extremely fragile, e.g., Haiti, Ethiopia, Tanzania, Iran, Pakistan, and those not on UNICEF’s list such as Mexico, Colombia, Indonesia, and India.

The UNICEF study and the household water insecurity study view water at two different spatial and social scales. UNICEF focuses on trying to integrate access to adequate water and sanitation services in fragile contexts into the humanitarian-development-and-peace building efforts that are on-going coupled with addressing Sustainable Development Goal 6. The household water insecurity tool provides a quantitative method for determining and measuring progress towards meeting SDG 6. Thus, UNICEF could incorporate the cross-cultural, comparative benefits of the household water insecurity tool into its proposed framework for integrating adequate water and sanitation services into efforts by international, individual government, and non-government programs working on SDG 6 and the Agenda for Humanity.

As water insecurity increases under worsening climate conditions for populations around the world, the number of individual households that can meet their water-related challenges, e.g., sufficient drinking water and sanitation services, will decrease. When aggregated across large internal regions, entire nation-states, and extra-territorial cross-border areas, these household numbers will add to instability. The stresses of instability, writ large to political, economic, and social systems will hamper U.S. foreign policy goals and ultimately its’ national interests.

By Caitlin Werrell and Francesco Femia in climate and security on January 22, 2020.
← How Terrorists Leverage Climate Change Army Corps Chief: We Will Continue to Consider Climate Change Unless Ordered Not To →